Many couples wonder what is allowed in a Catholic marriage ceremony and how they can plan this most important part of the wedding.

The presenter answers commonly asked questions about ceremony planning and explains the rules and traditions behind the answers.  Topics covered include the Catholic Wedding Rite, interfaith marriage, destination weddings, the involvement of non-Catholics, the bridal party, traditions, music, and readings. 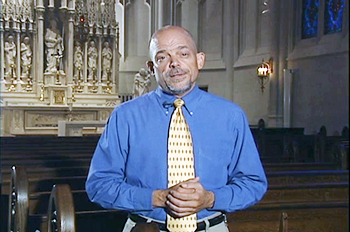 Todd Williamson has been the Director of the Office for Divine Worship in the Department of Parish Life and Formation of the Archdiocese of Chicago since 2000.

He is the author of two editions of Sourcebook for Sundays, Seasons, and Weekdays: The Almanac for Pastoral Liturgy (2007 and 2008, LTP) and has contributed to subsequent editions. He is also coauthor of Bringing Catechesis and Liturgy Together: Let the Mystery Lead You! (2002, TwentyThird Publications) and has written for numerous periodicals including Rite, Pastoral Liturgy, Catechumenate, and Religion Teacher’s Journal.

In addition to writing, Todd is a teacher and national speaker in the areas of liturgy and sacraments.